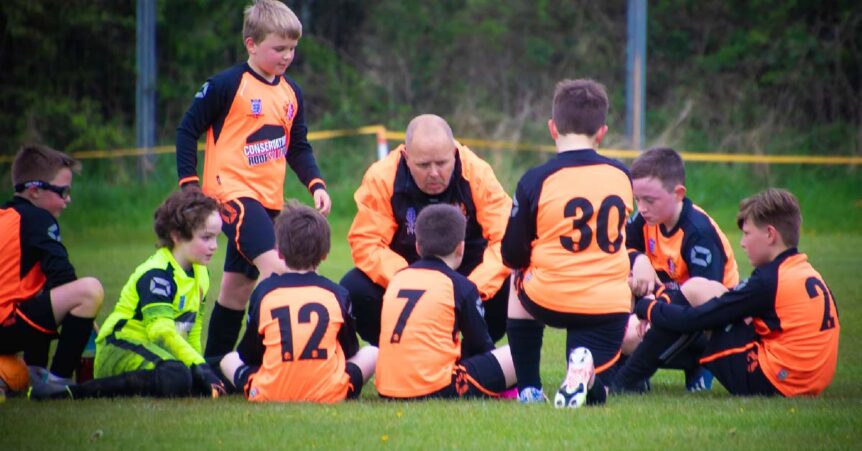 Ninjas
Goodness knows what is in the water in Daisy Hill, but they were a massive team. However, this didn’t deter the Ninjas and they put in another impressive performance. Before the game, we had a minute applause for young Jordan Banks, who tragically lost his life doing something he loved and the Ninjas did themselves proud and respected it perfectly
⚽️⚽️⚽️⚽️⚽️⚽️⚽️⚽️⚽️??
From the first minute they were on the front foot and played some fantastic football. It’s really pleasing to see them trying to do the right things and the opposition couldn’t live with us. The Ninjas created a number of goal scoring opportunities in the first 10 minutes and with a bit more composure in front of goal, would have been out of sight. They then got their reward for their play, thanks to SamO ⚽️, who smashed in the rebound, following some good work by Alf and Ollie. It looked like only one team would win the game and the opposition could only use their physical edge to get back into it. Previously a number of the Ninjas would have cowered away from this and I was so pleased that they stood up for themselves and battled to the end, even though they took some bumps. Just before half time the home team got back in the game against the run of play, thanks to a towering header from a corner by their 6ft centre back. Ted made a fantastic save to push it on to the post, it rebounded agonisingly along the line and Sam W did his best to keep it out, but just couldn’t 1-1. Half-time
This rocked the Ninjas and gave the home team some impetus and it wasn’t long before they were 2-1 ahead from a thunderous 30yrd free kick that went through a crowded box and Ted couldn’t do anything about it. The game suddenly turned into a basketball match and was end to end, with both teams having chances, but it was the Ninjas next on the score sheet thanks to Alf ⚽️, following up an Ollie shot 2-2. They kept going to try an win the game, but just unfortunately ran out of time. Full Time 2-2
Overall, another fantastic team performance where they all contributed, the consistency is definitely coming and the Ninjas will benefit from experiences like today. Ted commanded his box well and made some good saves. Harry and Jacob were confident on the ball in defence and Trist did a solid job in all the positions that he was asked to play. Ollie and Alf led by example and drove the team forward and the Sam’s never gave in, when up against some much bigger opponents. The most pleasing thing from all of them is their attitude, especially when trying rectify the situation when they make a mistake (which is ok to do) and how hard they work for each other?? Parents Player of the Match – SamO
Paul Heald

Academy
Well done to all of the boys, they all did fantastic. 6 games, 6 wins and only one goal conceded. We saw some defence splitting passes, a rabona goal and Elijah getting on the score sheet. A big thanks to everyone for helping clear the pitches – Scott Pendlebury
Super proud of our lads. Some superb team work and loads of smiling faces… which is what it’s all about – Matt Shea
It was great to be involved, all of the boys had a smile on their face and showed great sportsmanship – Gareth Nolan

Jedi
An away day trip to Turton Tigers, bit of a trek and come kick-off we had 3 missing Jedi, probably due to the quirky little venue hidden away in the scenic village of Edgworth. From the start the boys were on it and within 8 minutes Turton Tigers were using power play after ⚽️⚽️⚽️⚽️ from Lewis. I don’t know how he got one of the goals in from the touch line, class as always!! Wasn’t long before the backup arrived with Evan, Seth and Carson introduced on 10 minutes. The team continued to hold there own against the extra man and then Carson finished them off with one of his trademark runs ⚽️ Callum, again dominant in defence for the first 20, not only at winning the ball but also bringing the ball out calmly from his own half ?? like a boss!!
Quick team talk at the break and the boys sensed more goals, they all wanted to score so decided to go out and play game 2 without a defender ? just all out attack and chase back if needed. Well lesson learnt as Turton ended up nicking the game through break away goals. We tried to do too much on our own in that 2nd game, can’t knock the boys for wanting to score. Evan was super focused, lots of running and was in the right place to score just not enough power in the shot. Jude won a free-kick and unselfishly passed rather then shooting. Thomas smashed one in the roof of the net from 2 yards out ⚽️ and MoM Seth ? played some great balls into the channel for Carson to chase leading to another Carson ⚽️ assisted by Seth. Much luv to the Jedi FAM for the long car journeys today ??
Paul Chung

Troopers
At home today against Atherton Town Pythons. After a minutes silence for young Jordan Banks the TROOPERS set up with Oscar in goal Elsa marshalling at the back Captain Joe in midfield, Charlie and Freddie on the wings and Archie playing up front. From the whistle the Leigh team put the pressure on Town. It didn’t take long for Joe to press and get the ball in their half before scoring low in the corner ⚽️. The training we had done had really paid off and Leigh pressured from the kick off again. Joe whipped in a defence splitting pass through to Archie who netted a perfectly placed finish to make it 2 ⚽️. Atherton started to get a grip and pulled a couple of goals back with a couple of superb strikes from the number 10 which Peter Schmeichel would have struggled to save let alone Oscar. Oscar made some superb saves though to prevent any more going in before the end of the quarter. The game was fairly balanced with some real end to end running. Leigh kept their shape though passing and talking to each other like they had in training. Elsa and Joe cleaning up at the back and some really strong running by Charlie. Joe made some great passes allowing Archie to net a couple more times and Freddie to score. Atherton though didn’t give up and if it hadn’t been for Oscars presence in goal it could have been a lot closer. The second half Atherton managed to pull a couple back. Charlie and Elsa were both denied by some good goal keeping by their replacement keeper. The half was fairly even with goals apiece by both teams. In the dying minutes though Joe bagged his fourth with a wonder strike which looped over the keeper. ? ⚽️ Player of the match went to Freddie ?for running really well and really applying what he had been taught in training on the pitch this morning. Well done TROOPERS for a superb performance and playing really well as a team.
Nick Fox

Knights
We had our “derby” match today against Atherton Town Bears who are made up of a lot of the old Leigh Utd Vikings players (and coach). I put few challenges to the boys before the game; try and always keep our shape; play from the back; and press, press, press. I thought they did all 3 brilliantly. It gave the game a good rhythm, allowed us to look up and pass the ball and also meant that the boys worked really hard for each other all over the pitch. Both teams were really evenly matched, so not surprisingly the scores were 2-2 and 3-3, with there never being more than a goal between the teams. I genuinely couldn’t chose a man of the match. Oliver set the example of the way we wanted to play by his positioning but also his composure playing out from the back. Always has great technique and also got himself a ⚽️. Austin did exactly the same on the opposite side, great positioning, composed passing and strong running and tackling. He got injured in the first match but carried on, playing the second match in nets. Isaac slotted into Austin’s position and showed the same great positioning and was so strong in the tackle. I felt like we found Freddie’s position today, right in the middle of the pitch. He was always available for the pass, broke up a lot of Atherton’s attacks and formed a 3 pronged press with Lenny and Harry. Lenny and Harry did all sides of a forwards game today, working hard at pressing, finding space to receive passes out from the back but also both constantly getting in behind and being a threat. They must have had 10+ chances between them with Harry getting ⚽️⚽️⚽️ and Lenny getting ⚽️. I was standing in as caretaker manager today and just wanted to say thanks to the boys. I really enjoyed watching them today.
Oliver Kerwin

Titans
Great 2 games today from the Titans, we had to revert back to having 2 games which wasn’t great for the kids but it really helped out another team with no fixture, hopefully won’t happen to often. Back to the games and we turned up as strong as ever. Won the 1st game against Hinsford 2-1, great team to play against. We then beat FC Strikers 5-3, blinding goal from George Mc and Stotty slotted a few home. 2 MOTM today, I couldn’t pick between them. Harry Hatton, great performance from start to end, really been catching my eye over the last few months – Hatton it’s like your a new kid ? love it. 2nd MOTM Fallon, asked him to go in nets as we had no Cerys, he agreed and did a blinding job with some massive kicks nearly clearing a full pitch. Normally we depend on Fallon in defence but Marshy and Gannon kept that under control, thanks guys?. Thanks for doing the big slog of a drive mums and dads see you all Monday.
Andy Stott 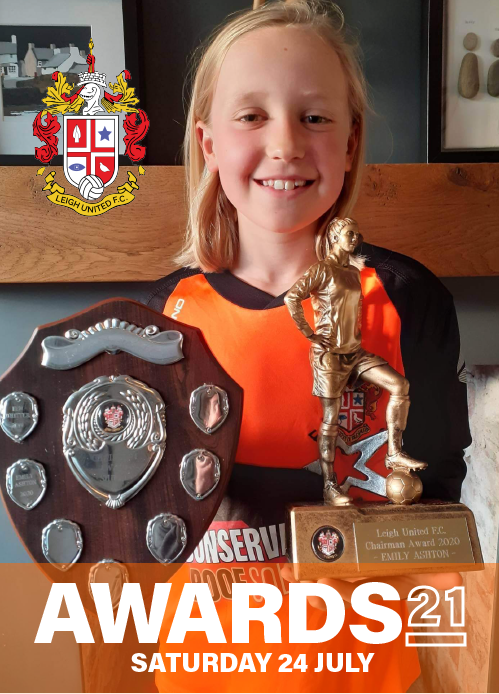